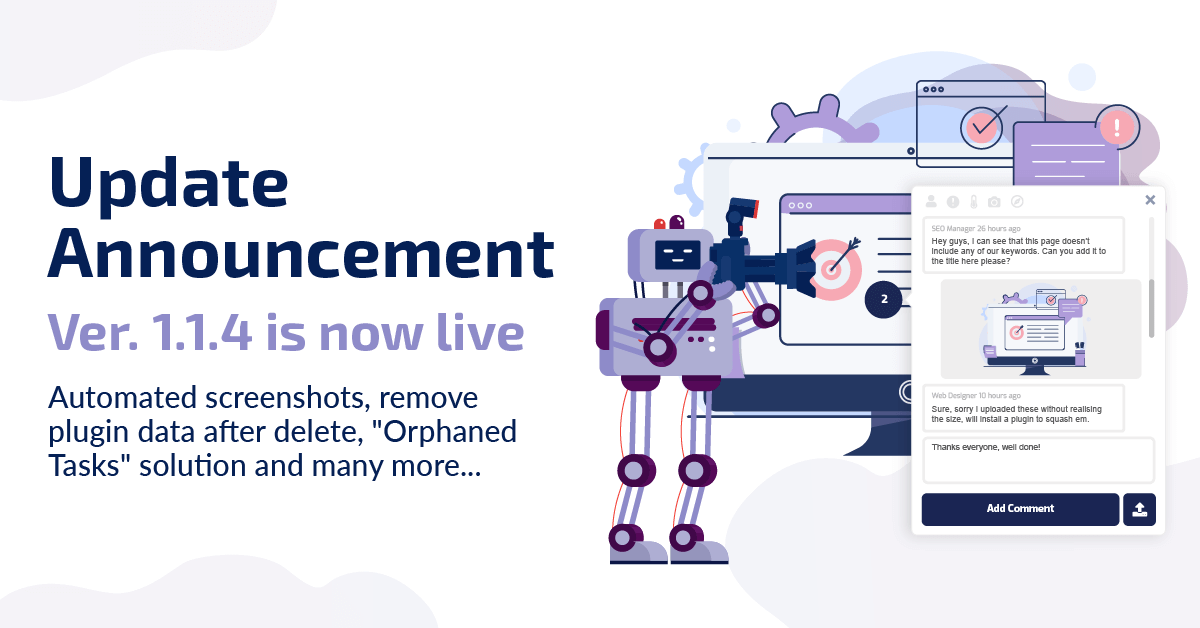 Editor’s Note: Since the original production and publication date for the post you’re about to read – we’ve since rebranded from WP FeedBack to Atarim (learn more).

This week we have a few interesting features for you all!

While we’re progressing on 2 big updates that are coming in the upcoming weeks, any spare time the team has (after done with support), we’re hard at work enhancing our existing features.

In the upcoming weeks, we’re releasing the first version of our cloud applications – the Centralised Dashboard – That will allow you to sync your entire network of WordPress sites into one place. That’s just the tip of the iceberg as we believe that this dashboard is going to change the way you, I and the rest of the WordPress community will eventually talk to clients.

This project will be done in stages and like the plugin, will get regular updates and additional features, based on our vision and our users’ requests.

We’re also progressing on the Graphic Design Feedback Tool, that will allow you to do pretty much the same things we’ve been doing on the live website, just on an image-based design. So you can collaborate on wireframes, screen and feature mockups, logos, flyers and other graphic designs you may create.

But for now, we have some exciting advancements this week:

Whenever a new task is created a screenshot is automatically generated and added to the comments feed. To start the conversation with the highest level of clarity, well, ever.

Sometimes, you can’t rely on the client to click that screenshot button.

So you flick this on, specifically for clients.

With our permissions board, you can choose the type of users (Webmaster, Client, Others, Guests) that will have this on, for perfect control, without any excess storage space used.

While we recommend keeping the data stored on the website, just in case, we’re preparing for the Centralised Dashboard that will allow you to have off-site records and allow you to clean the site up from tasks and comments.

We also had multiple requests for this option so we decided to expedite it based on your feedback.

This feature allows you to tick a box in the Settings screen that will clean up your folders and database from traces of the plugin.

It will be off by default, but please make sure it’s not on just in case.

I wouldn’t want you losing full conversations with your clients.

As you’re designing the site and iterating based on your client’s requests, you’ll probably move elements around or even delete full sections from the design.

What will happen to the tasks that were previously pinned to a specific HTML element?

Our initial approach was to move the task to the next closest item automatically, but as we’re gaining more and more users we’re seeing endless possibilities for which the task needs to consider when deciding where to move. Which caused the task sticker to appear in some weird places some times.

So from now, every time a task can’t find it’s parent, it becomes a General Task, which are tasks that are not assigned to a specific element on the page.

This means that the task will still appear on the sidebar but not messing up the page.

This is step 1 out of a 2 step process for this feature.

On an upcoming update, we’re enabling the option of Re-Mapping Tasks. So that with a click of a button, you can select a new “Parent” or HTML element to attach the existing task.

Other things Included This Week 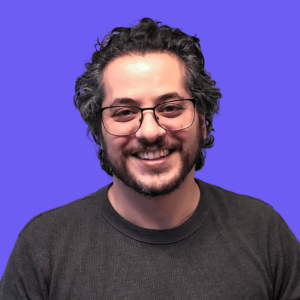 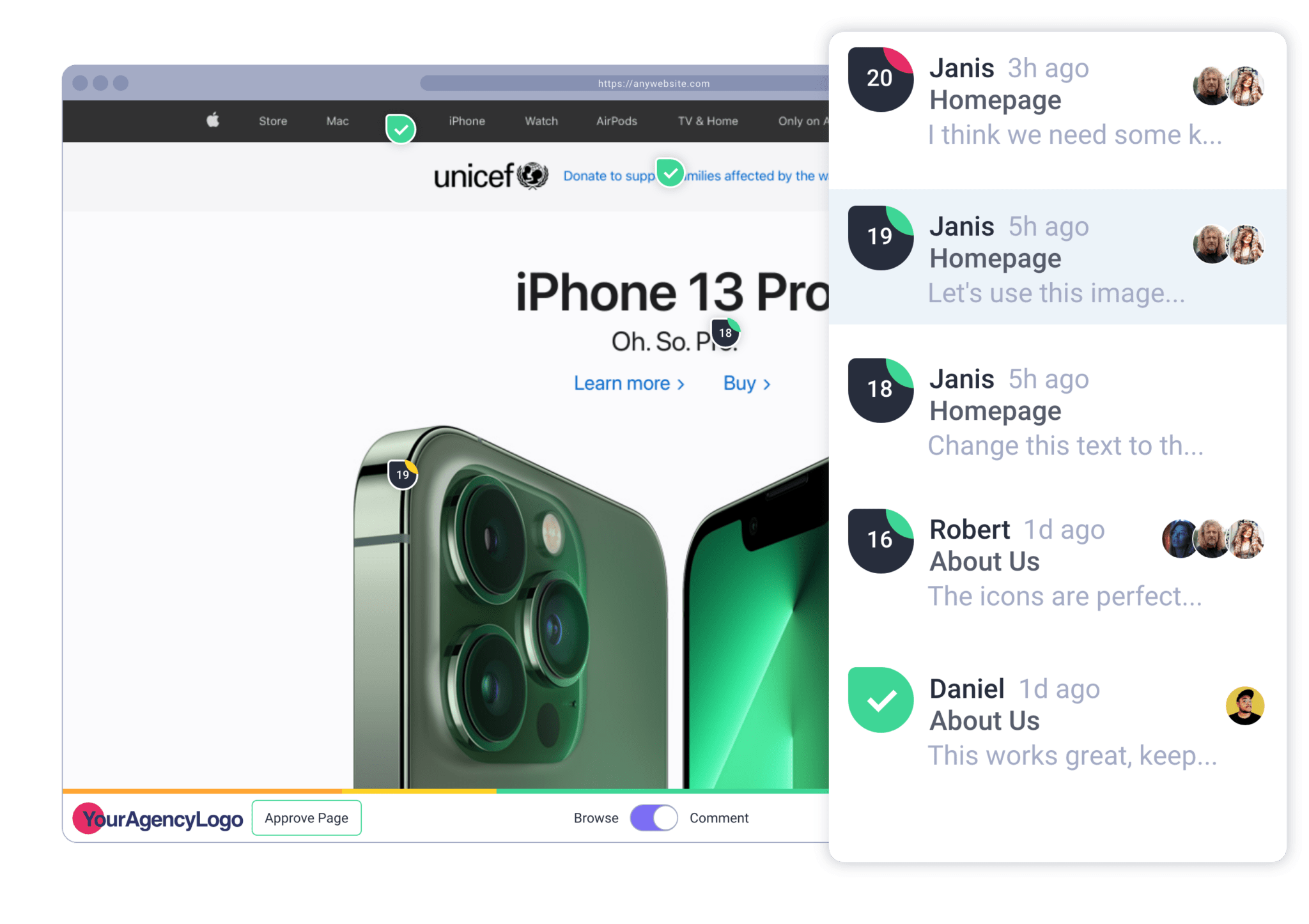 We help solopreneurs, digital agencies & product teams speed up their internal & clients projects delivery with the most advanced website collaboration system on the planet.

Where you, your colleagues and your clients can collaborate visually to reduce back and forth and confusion to zero.

The main hub of communications for your operations. This includes a built in support desk, all the requests from the different projects you're working on and a bunch of automation tools to help you speed up the work. 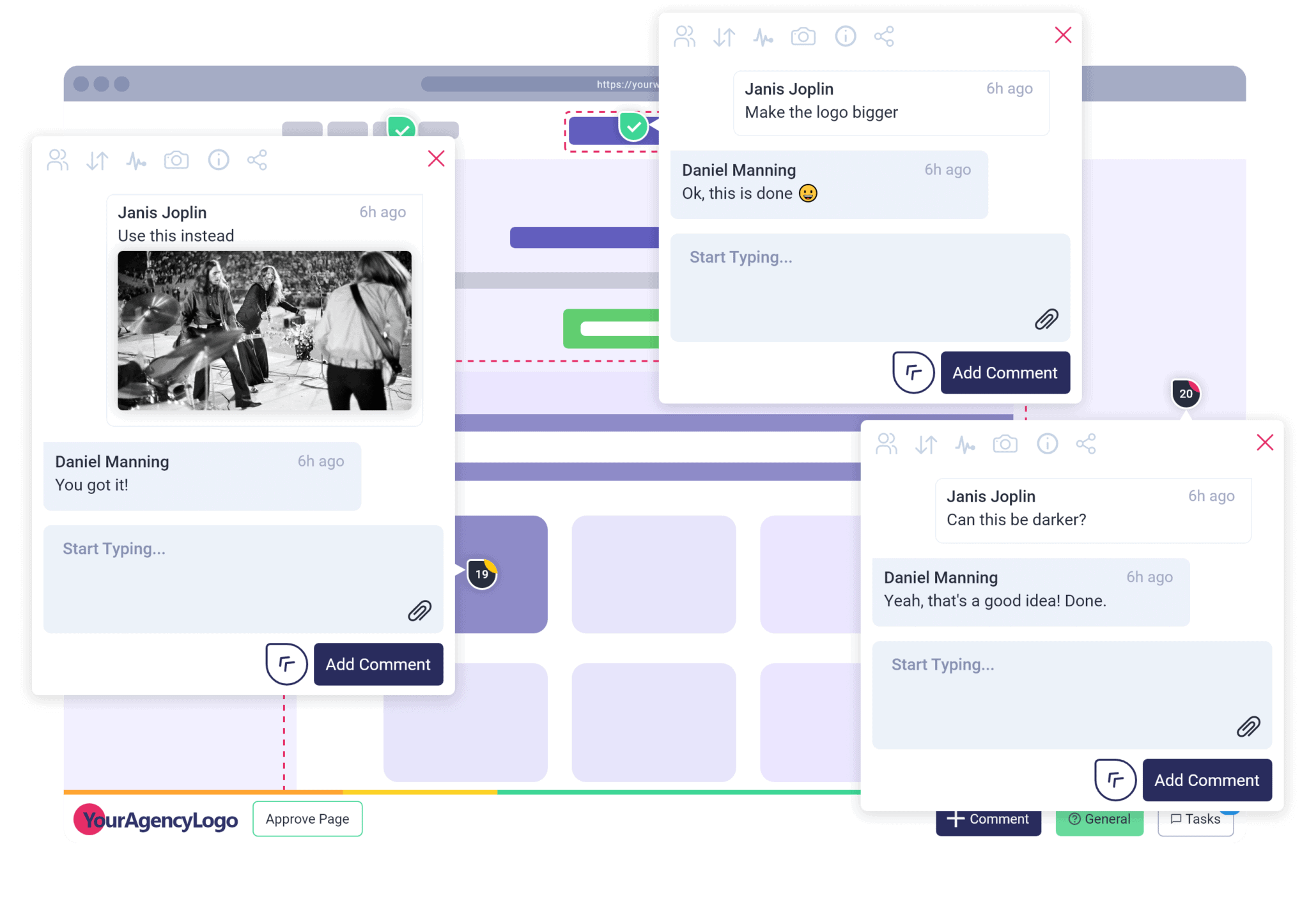 Our Agencies Serve Some of The Biggest Brands in the World

From small businesses to the biggest brands in the world, our agencies and freelancers are making an impact with more than 120,000 of their clients.

Wait... Add Your Website and Start Collaborating Visually For Free
Create an easy and, dare we say, fun workflow experience for you, your team and your clients, to increase project profitability and eliminate client delays.